Environmental compliance: Not enough is damaging. Too much is costly

Getting to grips with rules, regulations, products and materials on an international level.

The development manager raises his glass and, after a humorous speech, mingles with his colleagues: After a long development process, the new monitor is finally ready for mass production and can now be launched onto the market. The new device should regain lost market share and achieve international penetration. Resolution, design, function, price - everything is right, the mood is good. What he has no inkling of as yet: soon he will be cursing and wishing he had given some thought to disposal, even at the development stage.

Six months later: the company receives a letter from the Environmental Protection Agency. Could they please indicate whether the monitor has been registered, how many devices have been sold over the counter, what materials and packaging materials were used and please let us know where, how and what has been disposed of. But it doesn't end there with this letter: the monitor has been distributed in 23 countries and each country has its own environmental regulations and take-back laws. In addition, in some countries the monitor is bundled with speakers or a notebook. And the packaging was not always the same.

The development manager is summoned to the management board. Production, Controlling, Disposal, even the Legal Department attend the meeting. No one can say exactly what quantities can be specified, let alone which fees should be paid. The CEO looks around the room of questioning faces. So they work out an estimate of the quantities released onto the market and round them up. Just to be on the safe side, so they are legally in the clear. "End-of-life costs" are creating a completely new budget entry. The margin on the monitor, this bright new hope, shrinks, and the expected commercial results will have to be corrected. Downwards.

The development manager leaves the conference room. Shorter by a head and richer by an experience. If only there were a system to capture the environmental data for products which checks them for completeness and evaluates them on a country-specific basis at the touch of a button. A system which could process sales data and volume flows and submit certificates to the authorities… 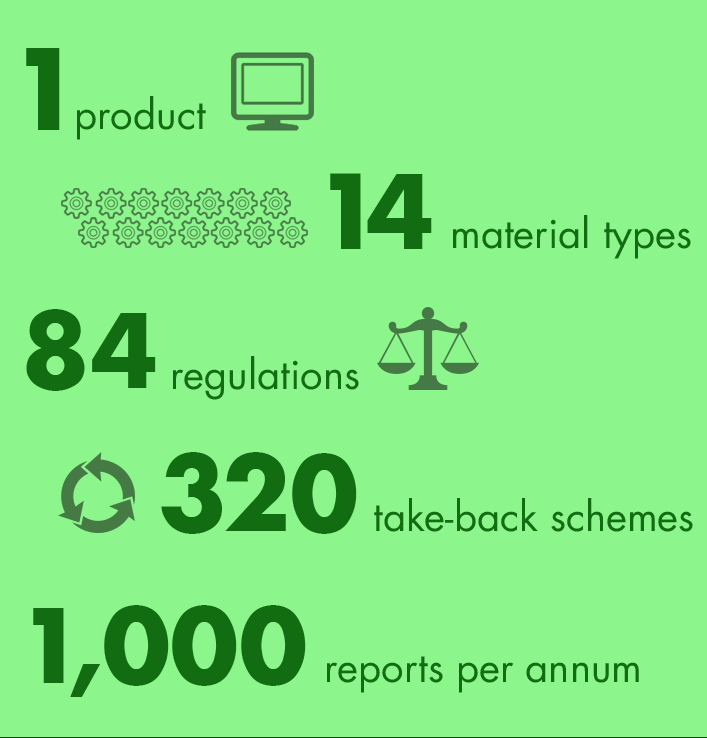 What does ICM do: