Waste disposal without the worry

Disposal and value creation for automobile manufacturers, workshops and garages by recycling of waste and discarded automobile parts.

The last stop, then that's it for today. Henrik Meiers sits in the cab of his truck and steers it into the authorised workshop of a leading car manufacturer on the outskirts of a major German city. He has already loaded five gitter boxes with brake discs and disused car parts onto his vehicle and there's still one more to come. On board, he also carries waste which is difficult to dispose of, such as used brake fluid, oil filters, car batteries and solvents. He also transports plastic packaging, styrofoam, waste paper and cardboard.

As Meiers arrives, the head of the authorised workshop is waiting for him in person this time. Lutz Wiese is looking forward to the timely and smooth pick-up. His workshop doesn't have unlimited space for the numerous special containers. However, these voluminous barrels and boxes are needed for the safe storage of old materials and hazardous waste until it can be collected. Even the exchange of the full containers for empty ones needs to happen quickly. Cars have to be moved around endlessly or space is required for new car parts. Henrik Meiers knows the site well and parks up his 12 ton truck so skilfully that visitors are still able to drive up to the workshop without any difficulty whilst he loads and unloads.

“Take a look at this”, says Meiers. The truck driver holds up a type of mobile phone with a thick antenna: a P3 handheld device (paperless pick-up process) for the fast and direct online processing of documentation. “At one stage a whole range of different documents and forms had to be filled out for every single container. Now everything is done electronically using this device.” Workshop manager Wiese takes the P3, signs his name on the display and taps on the “happy with the pick-up” smiley. Just a few seconds later, all collected material data and quantities are sent to the data centre, where they are documented and are easily accessible by the workshop at any time via a web portal.

The disposal service is often organised by the automobile manufacturer. All data is sent to a central location and is automatically transferred to the separate company systems. This creates continuous transparency: starting with the loads on Henrik Meier's truck, via the individual car repair shops, to the complex disposal network consisting of numerous service providers and special vehicles. Everything at a tap and a click, all automatic and almost in real time.

Just 10 minutes later the truck is loaded up and ready to go. Meiers leaves the workshop yard flashing his lights and heads off to his depot. Thanks to the segregated collection process, almost 100% of the used materials can be reused and recycled. New lead is obtained from old car batteries. Old packaging film is transformed into a valuable raw material by machine preprocessing. Even used antifreeze and old brake fluid generate new base materials for the chemicals industry after undergoing a refinement process.

Eight hours and 138 km later, Henrik Meiers is finished for the day. With his off-white pen, he makes notes for the next day's trip. He holds the pen up to me: “100 % recycled here as well”, he smiles and hands me the pen as a gift. The words “Return to Value” are printed on it. Come tomorrow, Meiers will already be back on another round, generating new value out of workshop waste. 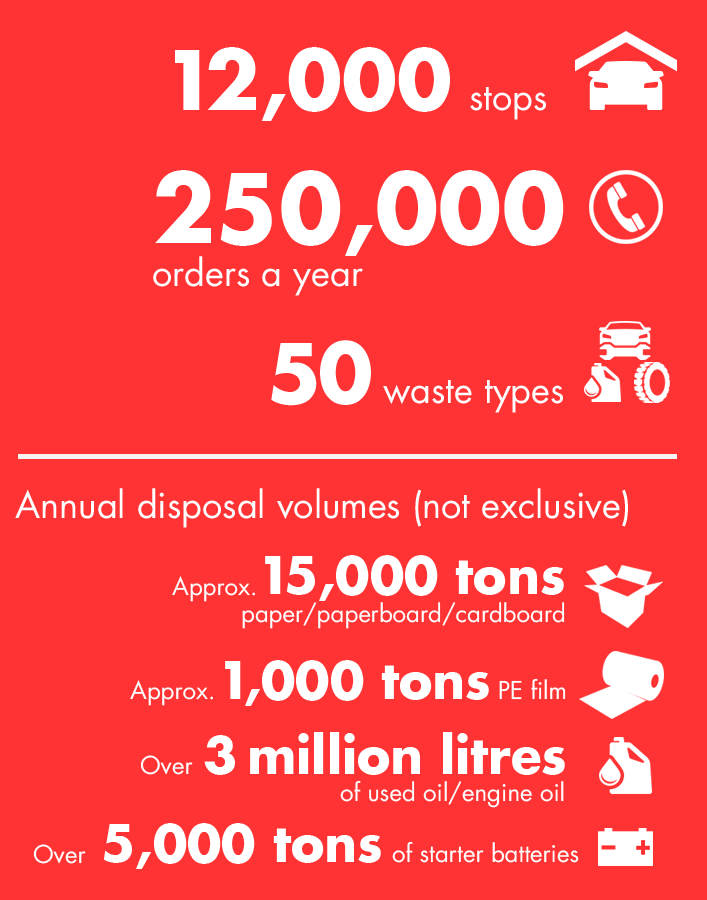